Power From the SON is a 501(c)3 non-profit corporation. Our team includes engineers, businessmen, lawyers, construction workers, accountants, and many people with varied experiences who want to use their skills to help others. 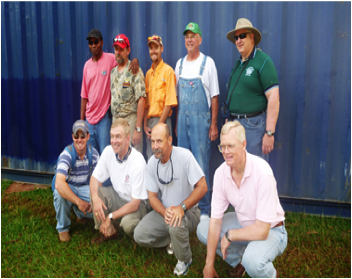 Team leader Steve Vincent hopes this is only the beginning for Power from the SON, the non-profit he founded in 2008 after working 32 years for Priester Supply and Stuart Irby.

“Countries need reliable electricity to emerge from their condition,” he said in an interview. “Without it, it doesn’t matter how hard-working or innovative someone is, they almost have to leave the country to improve their situation.”

Mr. Vincent at first wanted to power up one small village and grow from there. The Rev. Sam Dixon—the top executive for the United Methodist Committee on Relief who later died of injuries from the earthquake in Haiti—had another idea.

“Sam said ‘I’ll support you with the villages, but help me with the hospital first,’” Mr. Vincent recalls. “So I said sure. Little did I know it was a campus with 55 buildings for schools, a church, and a hospital that treats 24,000 patients a year.”

Before the two-week trip in June 2009, Mr. Vincent spent a year raising funds and recruiting his team from friends at the church and former business colleagues.

“We needed a design engineer, we needed people experienced in laying cable and connecting transformers, and others to hook up the hospital and school,” said Mr. Vincent. “I looked for people who could do those things, and had a heart for mission.” *

Power From the SON has found volunteers who have a heart for missions AND who know how to get things done. It takes a wealth of varied talent to do what very few organizations will attempt to do: design and build a power system in remote areas to help those who need it the most.

* Reprinted from an article by Bill Fentum in the United Methodist Reporter.